For some time, you can hear a strange sound on the band. Ever thought about what it is?

Well, it's called Over-The-Horizon-Radar. The OTH which you are hearing now on the band is from Iran.

Over-the-horizon radar, or OTH (sometimes also beyond the horizon, or BTH), is a type of radar system with the ability to detect targets at very long ranges, typically up to thousands of kilometres. Several OTH radar systems were deployed starting in the 1950s and 60s as part of early warning radar systems, but these have generally been replaced by airborne early warning systems instead. OTH radars have recently been making something of a comeback, as the need for accurate long-range tracking becomes less important with the ending of the Cold War, and less-expensive ground based radars are once again being looked at for roles such as maritime reconnaissance and drug enforcement (Source : WikiPedia)

Click image for bigger view and/or listen here to hear that sound !

Screenshot made by webmaster 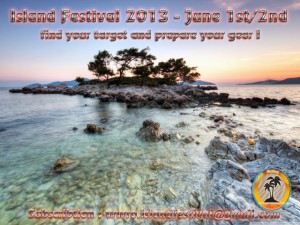 IR-DX members are invited to participate in this nice island festival weekend.
If you are not near an IOTA island, you are also allowed to activate inland waterway islands.

If you want to make use of an official IR-DX callsign, you need to contact the IR-DX HQ to get permission to use this call to be validated !